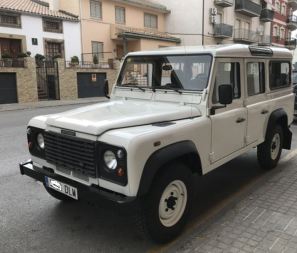 We are a legal company registered in the State of Florida.

If you do not see the car you want, please contact us with the information and we'll locate it for you.

Santana entered into talks with the Rover car company in 1956 in an attempt to get a licensing agreement to build Land Rover Series models in their factory, in a similar way to the Minerva company in Belgium, Tempo in Germany and Morattab company in Iran, all built Series Land Rovers under licence. An agreement was reached in 1956 and production began in 1958 it was licensed to build Land Rover models. The Santana Motor company built Series Land Rovers under licence in CKD form (Complete Knocked Down kits); essentially parts were shipped over from the Land Rover factory in Solihull and the Land Rovers were built up from this 'kit' at the Santana factory in Spain. Then Santana started to manufacture the parts in their highly advanced manufacturing center in Spain.Some parts were developed and manufactured in Spain and exported to the UK for use in genuine English Land Rovers, such as the LT77 transmission.Santana also went to front disk brakes much earlier than LR in the UK.the biggest mechanical difference was the suspension. Santana went to parabolic leaf springs were as LR UK transitioned to coils. Parts are EASY to find! Many are cross over parts. Main pro for them is the condition. Pretty much all of Spain is a sunshine state and that means no salt used on the roads unlike UK. They are capable vehicles especially the later ones on parabolics. Series 3 is exactly the same as a UK series 3 only no rot!. Parts can be found at paddocks in the UK, very cheap.Considered by many to be actually better quality build than the Land Rover Defender. What's not to like? Only the uneducated mock them.